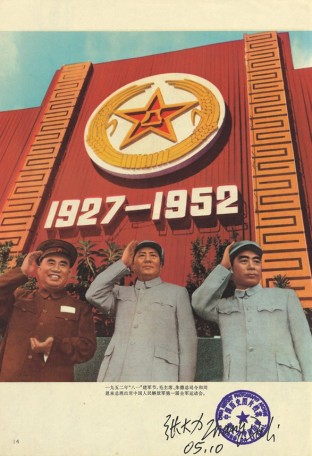 The First Sports Meeting of the People’s Liberation Army, 1952

The photographic prints in this exhibition, collected and juxtaposed by artist Zhang Dali, illustrate a number of techniques used to doctor official photographs in Mao-era China. Behind a veneer of documentary authenticity, and under the purported seal of photojournalism, these sublimated images—which Zhang, in the subversively inquisitive role of artist–archivist, traces back to their unvarnished source—aim to encompass and propagate an ideological zeitgeist. They attempt to channel both the hurtle of implacable historical momentum and the ballasting rootedness of sage political leadership.

Methods of photographic manipulation include: entirely erasing a particular figure or feature from a photograph; replacing politically “undesirable” figures with “desirable” ones; cropping a photograph, which allows for the potential “reframing” of reality and the deflection of perspective; modifying the background of a photograph to graphically and dramaturgically reinforce the central figure or figures and, by extension, elevate their perceived stature; and burnishing an image’s central subject or subjects to bring their physical appearance closer to a societal ideal of cosmetic flawlessness.

The significance of Zhang’s project isn’t, however, limited to merely laying bare and describing the techniques mentioned above. Rather, it motivates us to confront the degree to which manipulation of official photographs by government propagandists—regardless of the political system in which they operate—is capable of tinting public perception of reality precisely because factual and visual distortion is not only broadly accepted but in fact employed and practiced by society at large, with its collective attraction to, and orientation toward, preconceived ideals of beauty, eminence, and “impressiveness.”

Zhang Dali was born in Harbin in 1963. In 1987 he graduated from the prestigious Central Academy of Art and Design and decided to stay in Beijing, where he lives and works until now, as a professional artist, not accepting the working place assigned by the government.Zhang Dali is a multifaceted artist. He has worked on many subject and used several techniques: painting, graffiti, sculpture, photography, installation and performance. He was the first graffiti artist in China.In 2003 he started en extensive research on the power of propaganda, the use of campaigns/slogans and images to create A Second History.His latest works include World’s Shadows, cyanotypes and paintings, and Square, life size human sculptures and birds. Zhang Dali’s works have been exhibited in many important venues such as The MoMA and the MET in New York, The Venice Biennale, the Guangdong Art Museum, the Victoria and Albert Museum, the Saatchi Gallery and many others.