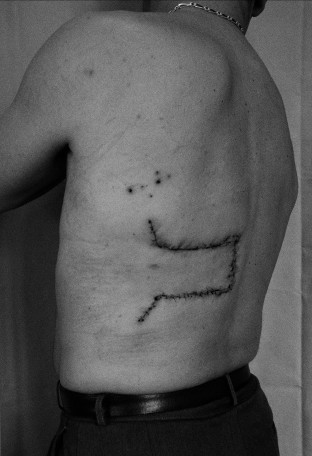 In times of peace and prosperity, cities and individuals alike follow higher standards, because they are not forced into a situation where they have to do what they do not want to do. But war is a stern teacher; in depriving them of the power of easily satisfying their daily wants, it brings most people’s minds down to the level of their actual circumstances. So revolutions broke out in city after city, and in places where the revolutions occurred late the knowledge of what had happened previously in other places caused still new extravagances of revolutionary zeal, expressed by an elaboration in the methods of seizing power and by unheard-of atrocities in revenge.

Thucydides, The History of the Peloponnesian War, fifth century BC, trans. Rex Warner

Every One (1994) is a series of photographs created after the artist’s visit to Yugoslavia, in 1991, at the beginning of its fratricidal war. The subject of this series is simply a wound, a scar, and not that specific injury documented on the spot. In her characteristic way, Ristelhueber presents us with a segment of a body captured in the manner of medical documentation. It is, as always, a mutilated fragment we are confronted with, in this case following a serious operation. The black and white photographs depict the dark, frayed zigzag of a suture, deceptively similar to the enigmatic lines covering the surface of the Kuwaiti desert in Fait (1992), an earlier series. In defiance of the precepts of documentary purity, these photographs of post-operation scars were taken in France, in a Parisian hospital.

Every One is a series devoted less to war (or documentary war photography) than to the memory of destruction that a conflict leaves in its wake. This is a pars pro toto, a scar in place of the anger that boils in a witness, which precludes a peaceful existence; a scar instead of an image of the war in its entirety, instead of thousands of photographs of a ravaged Sarajevo. The scar bespeaks the wound, the gunshot, the pain. And the scar remains.

Sophie Ristelhueber is a French artist. She has, for some thirty years, continued a reflection on territory and its history through a unique approach to the ruins and traces left by mankind in those places devastated by war, cultural upheaval, or natural calamity. Far from adhering to the framework of classical photo-narratives, she strives to implement the bare act and the stamp of history, on both the body and the landscape, by rendering visible wounds and scars—veritable memories of the “acts”of history. Ristelhueber’s work has been exhibited internationally at the Museum of Modern Art, the Museum of Fine Arts (Boston), Tate Modern, the Centre Georges Pompidou, the Rencontres d’Arles festival, and elsewhere.