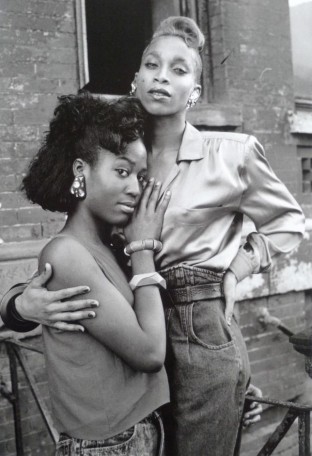 Chantal Regnault, Temperance and Octavia Saint Laurent, Harlem 1989, from the series Voguing and the House Ballroom Scene of New York 1989-1992 © Chantal Regnault. Courtesy of the artist

What do I see when I look at Nicki Minaj?

As soon as I look beyond what is in her case impossible to overlook, I can see the madness of excess, a complete jumbled confusion. I begin to be agitated by the mental shortcuts and political correctness that have allowed me to consider what is okay in the presentation of the body and what is not as a closed matter. I’m not sure if this is what the people responsible for the more than 400 million views that Anacondahas on YouTube also think; but we’re all participating in a performance built on the ruins of colonial imagination.

I cannot ignore associations with Saartjie Baartman, a young woman from the Khoikhoi people of southwestern Africa who, in the early 19th century, was used by a group of “entrepreneurial” white men as an itinerant sexual attraction: the “Hottentot Venus.” The main object of fascination for the European audience when the girl brought from the African colonies was presented were the proportions of her body, in particular the size of her buttocks. Forced into a life of public exposure and prostitution, Baartman died in the slums of Paris having not yet reached the age of thirty. Peace was denied to her even after death: her skeleton and a cast of her body were exhibited in a museum for more than a century.

Today, the story of the “Hottentot Venus” has appeared in countless cultural contexts, from postmodern works of art to academic essays; the name itself even serves as inspiration for a pseudonym being used by a director of feminist pornography. With all the noise that surrounds her now, what hits me hardest is a simple question: How similar am I to that 19th-century European audience when I look through travel books, skim over old postcards, or watch Nicki Minaj’s music video?

Paweł Szypulski, member of the Krakow Photomonth Board. Curator and visual artist who works with diverse archive materials. An anthropologist by training, he specialises in critical analysis of textual and photographical personal testimonies.