Łukasz Gorczyca, Adam Mazur: Vistula: With and Against the Tide of Propaganda 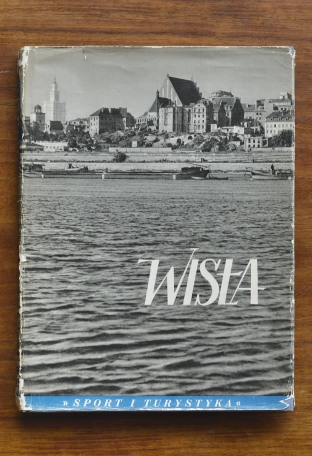 Out of the richly significant social history of the Vistula River, a novel idea emerged: to raft books downriver. Within the context of an exhibit on the Polish photobook, the decision was made to winnow a selection along topographical lines, down to titles whose primary focus is Poland’s longest and largest, as well as most symbolically resonant, river: the Vistula.

This concept was sparked by curiosity about what amounts to a vast and largely untapped trove of compelling visual material relating to the river; as well as a curatorial hunch that the most illuminating works on the subject of the Vistula and its place within the Polish psyche are to be found where the aesthetics of photographic representation and reproduction intersect with the modes and motivations of political propagandizing. In the case of the latter, the emblematic figure of the Vistula has, since time immemorial, served as the axis for the plotting of a national myth.

The goal is to examine the way in which the photobook format and Vistula theme have been used, on the one hand, by government propagandists attempting to tap an iconic river in the base interests of regime; but also, on the other, by those who have embraced the Vistula in the name of civic engagement, or been drawn to its banks in the search for elemental form and artistic truth.

Nearly fifty books have been arranged to form a meta-narrative of sorts, which we have divided into eight chapters. Each chapter focuses on a city or region through which the Vistula flows—from the Beskid Mountains in the south to the port of Gdańsk on Poland’s Baltic seacoast—while simultaneously highlighting various motifs of Polish cultural identity and their overlap with the traditions and tropes of Vistula River photography.

The exhibition’s core is formed by publications printed during the period of the Polish People’s Republic (1952–1989). They are additionally bracketed by publications from before 1945, as well as volumes released after 1989. The overlaying of all three publishing periods reveals a common wellspring of nationalistic themes and symbols, which collectively comprise a pictorial lexicon of remarkable vitality. For we are dealing with a model of photographic narration that has proven to be more resilient than regimes, and far more durable than the impermanence of any one single political agenda.

Łukasz Gorczyca, art historian. With Michał Kaczyński, he founded the artistic magazine “Raster”(1995–2003), and then a gallery and publishing house with the same name. Creator of exhibitions and author of publications on art. Co-authored the novel W połowie puste. Życie i twórczość Oskara Dawickiego(2010) and the book D.O.M. polski (2012).

Adam Mazur, art historian and American studies specialist, lectures at the University of Arts in Poznań. Exhibition curator and author of publications on art and photography, including the books Kocham fotografię,Historie fotografii w Polsce 1839–2009 and Decydujący moment. Nowe zjawiska w fotografii polskiej po roku 2000. Along with Jakub Banasiak and Karolina Plinta, he heads the magazine Szum.

Since 2013, Łukasz Gorczyca and Adam Mazur have been carrying out research on photo books, available on their blog, polishphotobook.tumblr.com.