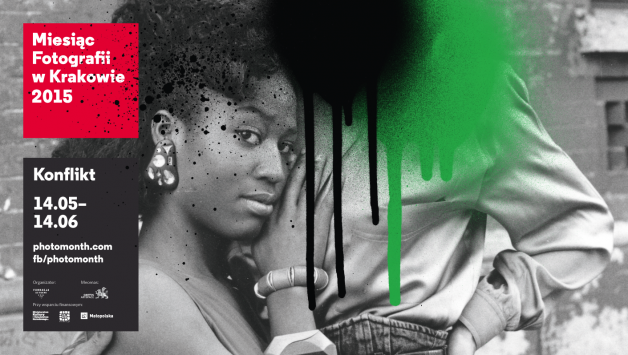 The theme of the Main Programme at Krakow Photomonth 2015 is conflict. It will therefore be a meditation on the possibilities and limitations of the medium towards a subject which, one might think, it is made to document.

But not always: because conflict does not mean only armed clashes; often, conflicts are played out only in someone’s imagination, and consist of gestures, or even memories, that are difficult to capture. Can a photograph fully document conflict situations, regardless of their nature, without the support of another medium – the written word, or film documentation? Can we use photography to talk about past events? These are just a few of the questions which we will be asking.

The programme will include exhibition of great of world photography, Josef Koudelka, as well as artistic-documentary exhibitions (such as Zhang Dali’s series on censorship of photography in Maoist China). The photographs of multiple award-winner Joanna Piotrowska (e.g. for her series Frowst, published by MACK Books last year), look at the dual, love-hate nature of close relations; Indrė Šerpytytė’s (1944–1991) work tackles the subject of memory. Markus Schaden (director of the PhotoBookMuseum in Cologne) will curate an exhibition on representation of conflicts in what for him is a separate medium – photo books. Paweł Szypulski is to tackle the subject of gender and race in photography. Łukasz Gorczyca and Adam Mazur use albums and books to tell the history of appropriation (political and otherwise) of a national symbol – the Vistula River. Finally, Wojciech Nowicki will focus on the times when photography appears helpless: using documentary photos he will capture moments when the lens is pointing the wrong way.

The starting point for thinking about photographic representations of conflict is the masterly, now classic reportage Invasion 68 Prague. Its author, Josef Koudelka, at the time a thirty-year-old theatre photographer, reacted to events spontaneously: with others, he went out onto the streets of Prague to document the invasion of a foreign army, the harm befalling his city, country, and fellow citizens; and also the harm befalling himself. The subject of Koudelka’s photos is therefore not only the events in Prague, but also the conflict between foreign forces and the lone person in the crowd. On the one side the Soviet tanks, and on the other the ordinary people of Prague, including a photographer whose only weapon is the chance to bear witness. They all wished for freedom too early; it would be over two decades more before it came.

For us, Invasion 68 Prague is an extremely interesting document, not only because Polish soldiers went to Czechoslovakia at the time to fight for socialism. It is also a possible, but fortunately unfulfilled, version of our history, as well as a universal narrative about a struggle for freedom that ran into seemingly insurmountable obstacles. Only stubbornness and time would allow them to be overcome. Koudelka’s series tells of remarkable events which for many were understandable, and moreover remembered, if not with their own memory, then with a reflected, borrowed one. It is also a document that fully explores the possibilities of the language of photography: artistically concise, unencumbered by embellishments, and employing mysterious elements – like in the iconic photo of an arm, its wrist with a wristwatch above the deserted city. Josef Koudelka gives a masterclass of how photography can depict conflict – the most obvious, armed variety.

Yet it is not war, uprising or social tension that is the theme of the festival – although they do crop up in the Main Programme exhibitions at the 13th edition of Photomonth. Instead, the festival is more of platform allowing us to explore the possibilities and limitations of the medium itself. This is the case with a number of exhibitions: that of Joanna Piotrowska’s, whose projects give an account of the oppressive character of interpersonal relations; Zhang Dali’s, whose series A Second History points to obvious distortions of history, a printed trace of which remains, recorded in books and magazines, even when with the passage of time they are discovered; and that of Indrė Šerpytytė – who tracks the places of conflicts and torments in Lithuania – years later, places and memory remain from them, but the documentation requires artistic processing and verbal commentary, as without them the picture cannot be understood.

The exhibitions created especially for Krakow Photomonth also concentrate on conflicts of interest, distorting the meaning of the image: Paweł Szypulski’s exhibition, devoted to the Foreign Body in artistic, fashion, documentary, reportage and scientific photography, concentrates on photographic representations of race and gender, with a particular emphasis on the appropriating character of pictures of non-white representatives of the human race as well as representations of women. Łukasz Gorczyca and Adam Mazur portray the similarly appropriating character of book publications associated with the River Vistula, a Polish symbol whose representation (along with that of the cities on it) is strongly dependent on time and politics.

The exhibition of the Main Programme curator is becoming something of a Krakow Photomonth tradition: Wojciech Nowicki will show what happens Right Next Door – photos taken during one of the bloodiest conflicts of the 20th century – the First World War – gathered mostly from the collection of the Ethnographic Museum in Krakow. These photographs, despite often being taken close to the front, neglect the wartime situation almost entirely, instead focusing on ethnographic recording. This is a textbook picture of how photography can become a blind tool, how fragmentary it tends to be, and how hard it is to use it to portray what we proudly call the truth.

We are particularly excited about the experimental project of Markus Schaden, director of the PhotoBookMuseum in Cologne. In keeping with the tradition of this institution’s exhibitions, the photo books on conflicts – such as events in Ukraine and Turkey – will be spatial, with particular emphasis placed on the process of their creation.