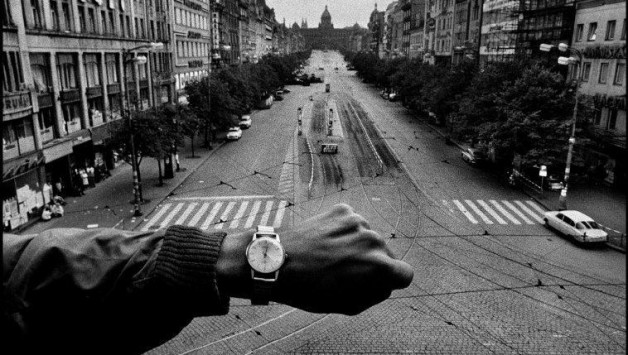 The day before the Soviet-led Warsaw Pact invasion of Czechoslovakia, in August 1968, thirty-year-old Josef Koudelka had just returned from Romania, where he had been photographing gypsies, a topic he’d been exploring for several years in parallel with his work as a budding theatre photographer. Koudelka had, not long before, given up a successful career as an aeronautical engineer in order to devote himself entirely to the field of photography. Although he had never before covered an unfolding news event, his Prague photographs, taken over the course of seven highly charged days that August, would come to embody Czechoslovakia’s struggle for freedom.

Owing to the efforts of Anna Fárová, a Czechoslovak art historian, and Eugene Ostroff, curator of photography at the Smithsonian Institution, a batch of the photographs was smuggled out of the country to the United States. Ostroff showed the photos to Elliott Erwitt, a photographer and former president of Magnum Photos. In 1969, Koudelka’s reportage was distributed by Magnum, and published in many periodicals around the world to mark the first anniversary of the invasion. In an effort to protect the photographer and his family from political retribution, Magnum attributed the images only to “P.P.” for “Prague Photographer.” That same year, Koudelka received recognition when the Overseas Press Club of America awarded the “anonymous Czech photographer” the Robert Capa Gold Medal.

Since the identity of “P.P.” could have been uncovered by Czechoslovakia’s StB secret police, Koudelka decided against returning to Prague from his travels in Western Europe, where, in 1970, he had gone at the invitation of Magnum to document the lives of gypsies. In 1984, the Hayward Gallery in London hosted a large-scale Josef Koudelka exhibition. It was at this time, well after the death of his father, and with his family no longer at risk of StB reprisal, that Koudelka first publicly acknowledged that it was he who had taken the Prague photographs. To accompany the London exhibit, his images were published as part of the Photo Poche series by the Centre National de la Photographie, Paris. They were first published in his native country as a supplement to Respekt, a weekly newspaper, in August 1990—a year after the Velvet Revolution brought an end to Communist rule in Czechoslovakia, and twenty-two years after the images were originally created. In 2008, they were published once again under the title of Invasion Prague 68, a photobook which has been subsequently issued in nine editions, including a Czech edition.

Comprised of nearly 250 photographs selected by Koudelka, most of which have never been previously published or exhibited before,this Invasion Prague 68exhibit chronicles the historic events of August 1968, which tragically influenced life in Czechoslovakia for nearly a generation to come. It is both a celebration of Koudelka’s book, as well as a testimony to the remarkable resilience of the Czechoslovak people during that one extraordinary week in Prague.

Josef Koudelka, photographer, was born in 1938 in Moravia. He took his first photos as a student of aeronautical engineering in the 1950s, and in 1961 he began photographing Prague theatre and Gypsies in Czechoslovakia. In August 1968 Koudelka documented the intervention of the Warsaw Pact forces in Czechoslovakia, smuggling his photos to the Magnum Photos agency, which published his material anonymously in The Sunday Times Magazine. In 1970 he left Czechoslovakia and was granted political asylum in England, and in 1974 became a full member of Magnum. He currently lives in Paris. Koudelka has garnered numerous awards for his reportage series, including a Robert Capa Gold Medal (1969), a Prix Nadar (1978), and a Grand Prix Cartier-Bresson (1991). The most important exhibitions of his works have taken place at the Museum of Modern Art and International Center of Photography in New York, Hayward Gallery in London, Stedelijk Museum of Modern Art in Amsterdam and Palais de Tokyo in Paris.