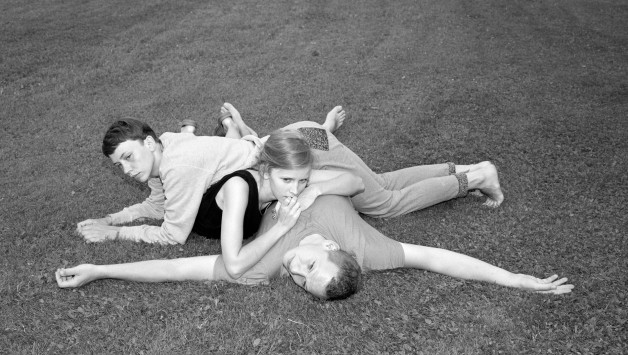 In her Frowst series, Joanna Piotrowska’s focus is on family and intimacy. As with 5128, an earlier series, the surfaces of these images—elegiac black and white photographs that emanate peace—allow one to consider the possibility of different outcomes. Their essence is not immediately discernible. Lack of attachment is one of many plausible versions of events.

Here is “family” in all of its different configurations. There are siblings, parents, and children—all brought close in a way that, at first glance, appears artificial. And yet it is without a doubt intimacy we are seeing, only one that has hardened. Piotrowska has created a visual treatise on what binds us, humans. She isn’t dealing with one-sided closeness, but rather the matrix of connections within which two (or three or four or an infinite number of) relatives, bonded by notarized kinship, express a great love toward each other, but also an even greater aversion. In these photographs, an element of unquestioned intimacy is tainted with an air of reluctance, oppression, boredom, and a barely noticeable hostility.

In this exhibition, Frowst is complemented by photographs drawn from two other installations, s.w.a.l.k and Hester: suffocating images of ugly interiors; rooms which feel like cages, and animal pens which bring dark houses to mind. Nothing is as it should be or, perhaps, everything appears as it truly is, situated somewhere between a visible reality and one that is imagined. Piotrowska’s images do not transpire on the surface; they venture deeper, to a place rarely accessed by photography.

What strikes one immediately is the lack of clarity with regards to feelings and meanings. What’s more, these photographs lack any embedded auto-commentary. Piotrowska releases her ambiguous work and simply allows for it to be displayed and viewed. That shimmering of senses combined with the precision of each frame is the main source of strength in Piotrowska’s photographs.

What is captured in those photographs could well be considered a form of strangulation, an act of lifting one up or holding one down against one’s will. There are unwanted kisses and undesired looks. At its most optimistic, Frowst allows us to witness a tender caress, a simple kiss, a shared look exchanged between those who are close to each other, and who allow for such intimacy. Conflict between those portrayed is transferred to viewers: there is no clear-cut answer as to how to interpret these photographs. (A shiver-inducing uncertainty.) That is where the power of Joanna Piotrowska’s art resides.

Joanna Piotrowska, photographer based in London who gained an MA from the Royal College of Art. Her work has been seen in numerous group shows in Spain, Poland, Latvia, Russia and UK. She has been included in Bloomberg New Contemporaries 2013 at ICA, Family Politicsat Jerwood Space, What Love Got to do with itat Hayward Gallery Project Space. Recently she had her solo show as a part of Emotional Resourcesat Northern Gallery of Contemporary Arts in Sunderland and a solo show at Southard Reid Gallery in London. Joanna Piotrowska won a major award to have her first book - FROWST published by MACK Book which is distributed internationally. She has recently been awarded Jerwood/Photoworks Award.